Monreale (Sicilian: Murriali) is a town and comune in the province of Palermo, in Sicily, Italy, on the slope of Monte Caputo, overlooking the very fertile valley called "La Conca d'oro" (the Golden Shell), famed for its orange, olive and almond trees, the produce of which is exported in large quantities. The town has a population of approximately 30,000, and it is located 15 km (12 mi) south of Palermo.

After the occupation of Palermo by the Arabs in 831 the Bishop of Palermo was forced to move his seat outside the capital. The role of the new cathedral was assigned to a modest little church, Aghia Kiriaki in the village nearby which was later called Monreale. After the Norman conquest in 1072 Christians got back the old city cathedral. Probably this role as temporary ecclesiastical centre played a part in King William II's decision to build here his famous cathedral

The town was for long a mere village, and start its expansion when the Norman Kings of Sicily chose the area as their hunting resort, building here a palace (probably identifiable with the modern Town Hall).

Under King William II the large monastery of Benedictines coming from Cava de' Tirreni, with its church, was founded and provided with a large asset. It is noteworthy that the new edifice had also an important defensive destination. Monreale was the seat of the metropolitan archbishop of Sicily, which thenceforth exerted a large influence over Sicily. 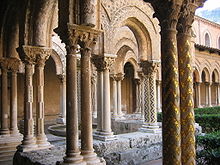 The cloister of the abbey of Monreale.

The Cathedral of Monreale is one of the greatest extant examples of Norman architecture in the world. It was begun in 1174 by William II, and in 1182 the church, dedicated to the Assumption of the Virgin Mary, was, by a bull of Pope Lucius III, elevated to the rank of a metropolitan cathedral.

The church is a national monument of Italy and one of the most important attractions of Sicily.

The archiepiscopal palace and monastic buildings on the south side were of great size and magnificence, and were surrounded by a massive precinct wall, crowned at intervals by twelve towers. This has been mostly rebuilt, and but little now remains except ruins of some of the towers, a great part of the monks' dormitory and frater, and the splendid cloister, completed about 1200.

This last thumb|left|is well preserved, and is one of the finest Italian cloisters both for size and beauty of detail now extant. It is about 16 m², with pointed arches decorated with diaper work, supported on pairs of columns in white marble, 216 in all, which were alternately plain and decorated by bands of patterns in gold and colors, made of glass tesserae, arranged either spirally or vertically from end to end of each shaft. The marble caps are each richly carved with figures and foliage executed with skill and fertility of invention, no two being alike. At one angle, a square pillared projection contains the marble fountain or monks' lavatory, evidently the work of Muslim sculptors.

One of the towers of Monreale Cathedral

The church's plan is a mixture of Eastern Orthodox and Roman Catholic arrangement. The nave is like an Italian basilica, while the large triple-apsed choir is like one of the early three-apsed churches, of which so many examples still exist in Syria and other Oriental countries. It is, in fact, like two quite different churches put together endwise.

The basilican nave is wide, with narrow aisles. Monolithic columns of grey oriental granite (except one, which is of cipolin marble), evidently the spoils of Antique buildings, on each side support eight pointed arches much stilted. The capitals of these (mainly Corinthian) are also of the classical period. There is no triforium, but a high clerestory with wide two-light windows, with simple tracery like those in the nave-aisles and throughout the church, which give sufficient (if anything too much) light.

The other half, Eastern in two senses, is both wider and higher than the nave. It also is divided into a central space with two aisles, each of the divisions ending at the east with an apse. The roofs throughout are of open woodwork very low in pitch, constructionally plain, but richly decorated with color, now mostly restored. At the west end of the nave are two projecting towers, with a narthex (entrance) between them. A large open atrium, which once existed at the west, is now completely destroyed, having been replaced by a Renaissance portico by Giovanni Domenico and Fazio Gagini (1547-1569).

It is, however, the large extent (6,500 m²) and glittering splendour of the glass mosaics covering the interior which make this church so splendid. With the exception of a high dado, itself very beautiful, made of marble slabs with bands of mosaic between them, the whole interior surface of the walls, including soffits and jambs of all the arches, is covered with minute mosaic-pictures in brilliant colors on a gold ground. The mosaic pictures are arranged in tiers, divided by horizontal and vertical bands. In parts of the choir there are five of these tiers of subjects or single figures one above another.

The half dome of the central apse has a colossal half-length figure of Christ, with a seated Virgin and Child below; the other apses have full-length colossal figures of St Peter and St Paul. Inscriptions on each picture explain the subject or saint represented; these are in Latin, except some few which are in Greek. The subjects in the nave begin with scenes from the Book of Genesis, illustrating the Old Testament types of Christ and His scheme of redemption, with figures of those who prophesied and prepared for His coming. Towards the east are subjects from the New Testament, chiefly representing Christ's miracles and suffering, with apostles, evangelists and other saints. The design, execution and choice of subjects all appear to be of Byzantine origin, the subjects being selected from the Menologium drawn up by the emperor Basil II in the 10th century.

Although not so refined as mosaics in Cefalù and the Palazzo dei Normanni, the cathedral interior nevertheless contains the largest cycle of Byzantine mosaics extant in Italy.

In the central apse at Monreale, behind the high altar, is a fine marble throne for the archbishop. This position of the throne is a survival of the early basilican arrangement, when the apse and altar were at the west end. In that case the celebrant stood behind the altar at mass, and looked over it eastwards towards the people. On the north side, in front of the high altar, is another somewhat similar throne for the use of the king.

The tomb of William I of Sicily (the founder's father), a magnificent porphyry sarcophagus contemporary with the church, under a marble pillared canopy, and the founder William II's tomb, erected in 1575, were both shattered by a fire, which in 1811 broke out in the choir, injuring some of the mosaics, and destroying all the fine walnut choir-fittings, the organs, and most of the choir roof. The tombs were rebuilt, and the whole of the injured part of the church restored, mostly very clumsily, a few years after the fire.

On the north of the choir are the tombs of Margaret of Navarre, wife of William I, and her two sons Roger and Henry, together with an urn containing the viscera of Saint Louis of France, who died in 1270. The pavement of the triple choir, though much restored, is a very magnificent specimen of marble and porphyry mosaic in opus alexandrinum, with signs of Arab influence in its main lines. The mosaic pavement of the nave was completed in the 16th century, and has disks of porphyry and granite with marble bands intermingled with irregular lines.

Two baroque chapels were added in the 17th and 18th centuries, which are fortunately shut off from the rest of the church. The bronze doors of the mosaic-decorated portal on the left side was executed by Barisano da Trani in 1179.